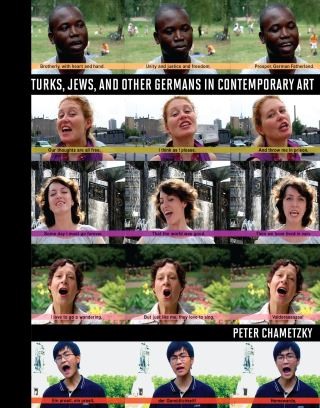 Turks, Jews, and Other Germans in Contemporary Art

The first book to examine multicultural visual art in Germany, discussing more than thirty contemporary artists and arguing for a cosmopolitan Germanness.

With Turks, Jews, and Other Germans in Contemporary Art, Peter Chametzky presents a view of visual culture in Germany that leaves behind the usual suspects--those artists who dominate discussions of contemporary German art, including Gerhard Richter, Anselm Kiefer, and Rosemarie Trockel--and instead turns to those artists not as well known outside Germany, including Maziar Moradi, Hito Steyerl, and Tanya Ury. In this first book-length examination of Germany's multicultural art scene, Chametzky explores the work of more than thirty German artists who are (among other ethnicities) Turkish, Jewish, Arab, Asian, Iranian, Sinti and Roma, Balkan, and Afro-German.

With a title that echoes Peter Gay's 1978 collection of essays, Freud, Jews and Other Germans, this book, like Gay's, rejects the idea of "us" and "them" in German culture. Discussing artworks in a variety of media that both critique and expand notions of identity and community, Chametzky offers a counternarrative to the fiction of an exclusively white, Christian German culture, arguing for a cosmopolitan Germanness. He considers works that deploy critical, confrontational, and playful uses of language, especially German and Turkish; that assert the presence of "foreign bodies" among the German body politic; that grapple with food as a cultural marker; that engage with mass media; and that depict and inhabit spaces imbued with the element of time.

American discussions of German contemporary art have largely ignored the emergence of non-ethnic Germans as some of Germany's most important visual artists. Turks, Jews, and Other Germans in Contemporary Art fills this gap.

Peter Chametzky: Peter Chametzky is Professor of Art History at the School of Visual Art and Design at the University of South Carolina.