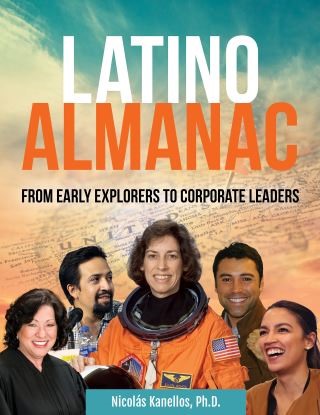 From Early Explorers to Corporate Leaders

A celebration of people and pride! Explore the achievements and contributions of Latinos in the United States with this illuminating history.

Whether calling themselves Latino, Latinx, Hispanic, Chicano, or something else, Latinos in the United States are a mix of people and multiple identities, each unique, varied, and accomplished. Beginning with the Spanish explorers in the sixteenth century, Latinos have been an important part of American society. They’ve fought the Revolutionary War, the Civil War, and all wars in between and since, and in the last decade, their businesses have grown at twice the pace of the overall U.S. economy.The most complete and affordable single-volume reference on Latino history available today, Latino Almanac: From Columbus to Corporate America honors the history and the impact of Latinos on the United States. This hefty tome is a fascinating mix of biographies, little-known or misunderstood historical facts, and enlightening essays on significant legislation, movements, current issues, and achievements across a variety of fields, including business, labor, politics, the military, music, sports, law, media, religion, art, literature, theater, film, science, technology, and medicine. A large collection of 650 biographies includes both celebrated and lesser-known Latino stars, such as

While Latinos are among both the original and newest immigrants, today the majority of U.S. Latinos were born here and most speak English—although most are bilingual to one degree or another. Their influence on the economy and culture continues to increase. Their impact on the United States has been wide-ranging. Salsa has even overtaken ketchup to become the most popular condiment in the United States! Devoted to illustrating the moving and often lost history of Latinos in America, Latino Almanac is a unique and valuable resource. Numerous photographs and illustrations, a helpful bibliography, a timeline, and an extensive index add to its usefulness. Commemorating and honoring Latino achievements, honors, and influence, this important book brings to light all there is to admire and discover about Latino Americans!

Nicolás Kanellos: Nicolás Kanellos is the Brown Foundation Professor of Hispanic Studies and director of Recovering the U.S. Hispanic Heritage of the United States, the premier center for research on Latino documentary history in the United States. He is founding publisher of both the noted Hispanic literary journal The Americas Review and the nation’s oldest and most esteemed Hispanic publishing house, Arte Público Press. Dr. Kanellos has received numerous awards and recognition for his work, including the Anderson Imbert Lifetime Achievement Award by the North American Academy of the Spanish Language. He has authored or contributed to numerous books on Hispanic history, culture, and literature, including Hispanic Literature of the United States: A Comprehensive Reference, the Hispanic-American Almanac, and the Handbook of Hispanic Cultures in the United States. His books have won numerous awards, including the ALA’s Best Reference Work and selection by Choice to the top 50 outstanding academic books.