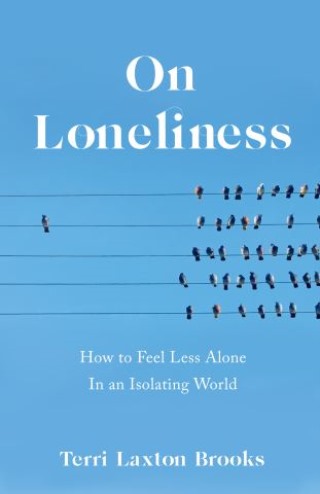 How to Feel Less Alone In an Isolating World

In this no-holds-barred, provocative book, Terri Laxton Brooks tells a story that often remains hidden— that of a successful professional who has many friends and family and yet all her life has struggled with a loneliness she’s never revealed to anyone.
Terri thinks her feelings of isolation will end with her marriage to her childhood sweetheart and their move from a farm town to the city of Chicago. But once the sheen of newlywed passion wears off, her husband, by nature reticent, grows even more emotionally distant. In her new job as a reporter for a Chicago paper, Terri hides her loneliness under a flurry of bylines and deadlines. But she can’t shake a feeling she’s had since childhood—of failure to connect, not just as a wife but also as a daughter, friend, and colleague—and soon she and her husband separate. Adrift, Terri contemplates suicide. Could a move to different city, to a fresh start, solve her problem?
Terri’s decision to transplant herself to New York City forces her hand in a way she never imagined: it plunges her into a loneliness so total that out of desperation she grabs the key to her own salvation— ; love of interviewing, researching, hearing people’s stories. After starting therapy, her curiosity leads her into four years of soul-searching conversations with America’s leading psychologists and psychiatrists about how to cope with loneliness, why it is a normal and necessary stage of healthy growth, and how to stop resisting it. She explores with growing understanding intimate details of her dreams, her past traumas, and her role in her own loneliness—and learns not only how to live comfortably with that loneliness but how to use it to her advantage.

Terri Laxton Brooks: Terri Laxton Brooks grew up in Reedsburg, Wisconsin, a farm town of one-square-mile surrounded by cornfields. The first in her family to go to college, she majored in journalism and French at the University of Wisconsin-Madison in the 1960s. Her first job out of college was as a Metro reporter for the Chicago Tribune. After four years at the Tribune, she moved to New York City, where she became a professor and then chair of the journalism department at NYU for nineteen years. She later served as dean of the Penn State college of communications. The author of three other nonfiction titles—Bittersweet: Surviving and Growing from Loneliness, Women Can Wait: The Pleasures of Motherhood After 30, and Words’ Worth: Write Well and Prosper—Terri has also published hundreds of articles in publications including the Chicago Tribune, The New York Times, Harper's, Redbook, Cosmopolitan, Columbia Journalism Review, and Writer’s Digest. She has a wonderful son who serves as a Lieutenant Commander on Destroyers in the U.S. Navy. She currently lives in New York City.